In this podcast from Thinking Allowed Laurie Taylor interviews Ian Angell- who criticices the claims that scientists make about truth.

Angell is critical of something he calls ‘Scientism’ – which is the idea that science is the highest form of human endeavour, that science is truth and that it is the only way of descrbing and understanding the world. He points out that not all scientists fall into this trap as even great scientists, such as Einstein, can be humble about the capacity of thier scientifc models to actually describe the world as it really is, rather than those models being just one way of helping us to make sense of the world.

He argues that ‘just because it (science) works’, doesn’t mean its true – and uses the example of Newtonian mechanics to illustrate this – Newton provided us with a model of the universe that enabled us to achieve great feats such as going to the moon and yet this model is no longer regarded as a true representation of  the way the world works.

He also raises questions about the nature of causality – Angell argues that ‘causality’  is something which we apply to the world rather than something that is found in the world. In other words ‘causality’ is a linear pattern which we confer on a chaotic world in order to make sense of it. Causality, he argues, is one of the delusions of cognition that we convey on the world in order to make our way in it – when we think causality is actually out there rather than something we have made up – then we are deluded.

He also seems to be arguing that the world ‘out there’ is just as it is, there is no essential order to it, but what we do as humans is to categorise things into the world, but in reality, the world is not as orderly as our categories suggest.

This is clearly of relevance to the ‘Sociology and Science’ debate – arguing that even science is not as objective as it would claim to be!

Angell actually comes accross as quite angry – he would maybe benefit from chilling out and doing some Tai Chi – like Fritjoff Capra who wrote the Tao of Physics – which I seem to remember said very similar things to what he’s arguing…. just without the irritation. 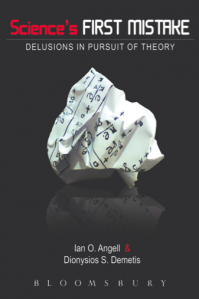 I wouldn’t necessarily recommend reading it, but the podcast summarise some of the ideas in this new book – by Ian O.Angell and Dionysios S. Demetis – taken from the web site –

One thought on “Science is not scientific”