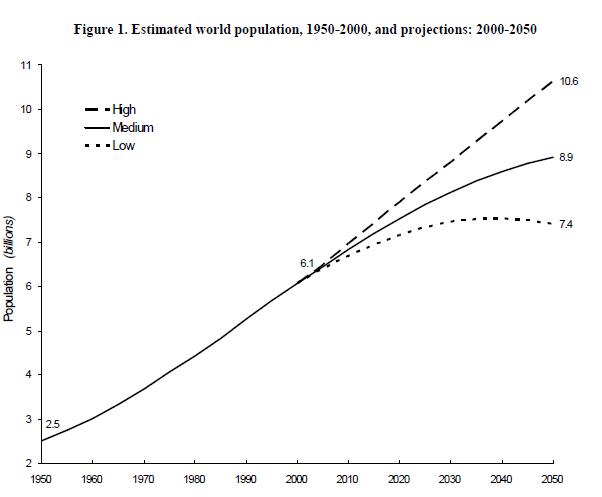 The world population recently topped 7 billion, and current UN predictions are that it will reach 9 billion by 2050, but does this matter – are we facing a crisis of overpopulation in which population growth will outstrip the limits of the planet to provide for us?

The original and most famous exposition of this thesis was by Thomas Malthus in 1798 whose basic idea was that population increased exponentially but food supply only increased incrementaly, so population growth would always outstrip the ability of the population to feed itself. Malthus predicted that the world would run out of food by 1890.

However, such population increase lead Malthusianism to be revisited by Paul Erlich in his 1968 population bomb, who predicted that high birth rates would lead to mass famine and reduce the population by at least 1/5th by the end of the 1970s.

Again with hindsite Erlich also got it wrong, and clearly not because of any global reduction in population, which has grown significantly since Erlich’s day, so could it be that the Malthusian doomsayers are just wrong?

Criticisms of Malthusianism – Overpopulation is a myth (.com)

There are more criticisms of Malthusianism on the web site, with data and links!

Limits to growth – How many people can the earth support?

This video, hosted by David Attenborough,  lies somewhere between Malthusianism and the ‘overpopulation myth busters’ – It starts off with the point that we are approaching the Earth’s limits to growth, while holding open the possibility that we can prevent meltdown, but only if we make a concerted global effort…..

Attenborough suggests three solutions to our reaching the limits to growth

Secondly we could reduce our consumption

Thirdly we can control population growth in the developing world

None of these are necessarily going to happen of course, and I think I might deal with these in  a seperate post…

What, you might ask, do these have in common? – They are all examples of the developed world using land in the developing world to fuel high levels of consumption at the expense of local populations.

All thes clips are from the BBC’s excellent ‘Future of Food’ series which aired in 2010.

The first videos look at how Kenya exports £1.5 million of food to the UK – while at the same time being dependent on Food Aid to feed it’s children – and I’m sorry but I’m with the bioregionalists on this – this is crazy! (starts half way in)

This final clip looks at land grabs – China and Saudi Arabia, amongst others, are leasing huge tracts of land in Africa to export food back home.

Of course, you could argue that these projects mean that these developing countries are bringing money in – thus inducing more rapid economic growth which should eventually lead to higher family incomes and smaller family sizes. This will no doubt happen – for the emerging middle classes – but I somehow doubt this will be the reality for the millions of poor farmers that get pushed off their land and into further poverty as large factory farms oriented to exporting to the developed world play an ever larger role in agriculture in the developing world.

In this video Hans Rosling talks about population growth since 1960 to the present day and muses on what might happen by 2050 – using boxes as a visual aid to highlight how population growth occurs mainly in the developing world.

While this video is an excellent aid to understanding how population is growing and how world demographics, in terms of how population sizesare changing in the developing compared to the developed world, there is little analysis of why population growth occurs, despite the rather obvious stateement that it’s linked to high birth rates.

Rosling says that he’s a ‘possibilist’ rather than an optimist or a pessimist – at the end of the video Rosling states that with a combination of the right assistance from the West, efficient use of green technologies and good governance in the developing world, we can effectively slow population growth in the developing world.

The videos in this post, however, might convince you that far from the west assisting the developing world in brining its population under control, quite the opposite happens – the West sucks food resources out of the developing world – keeping poor countries stuck in a cycle of poverty – high birth rates – rapid population growth.